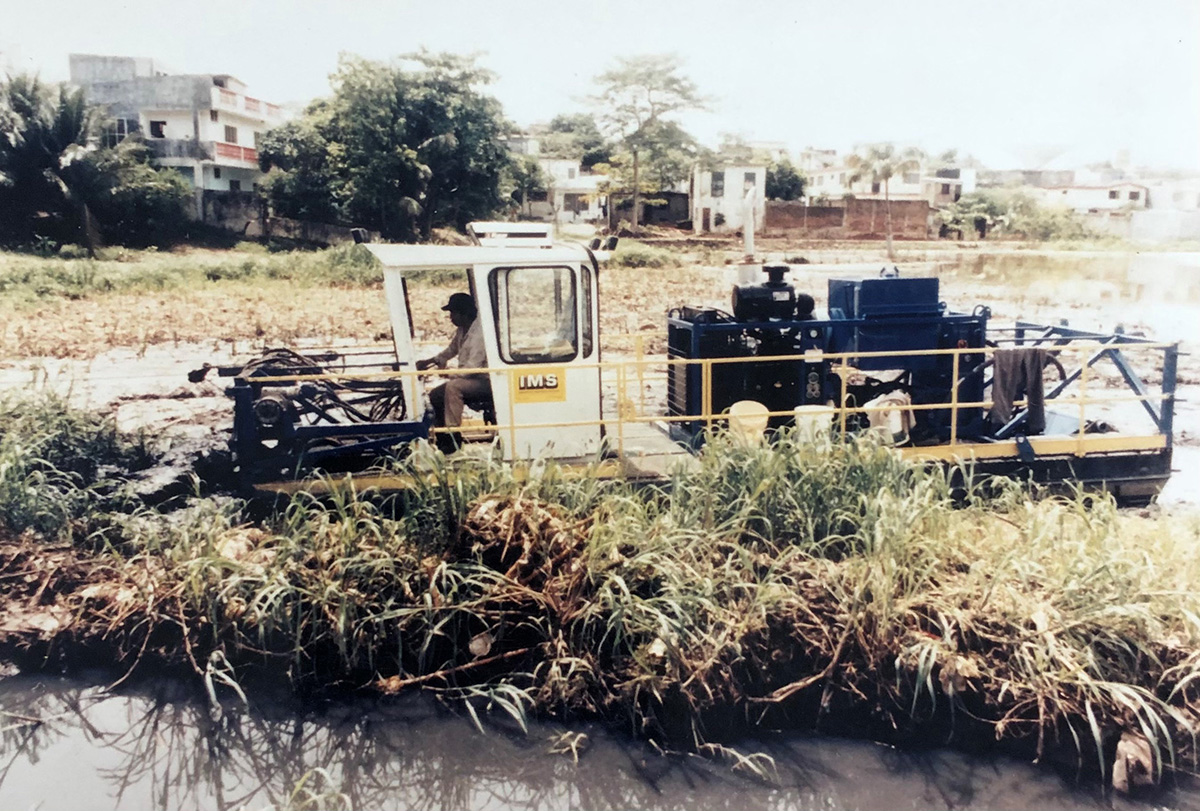 The City of Villahermosa is in the State of Tabasco, Mexico, which is bordered by the Gulf of Mexico on the north and Guatemala on the east. The area’s economy is driven mostly by the oil industry offshore in the Gulf. Tabasco’s equatorial climate, like the rest of the Yucatan Peninsula, is hot and wet, providing ideal conditions for aquatic vegetation to flourish in the many lakes found in this state.

Most of the lakes in this region have become choked with floating, submerged and emergent weed masses – such as floating hyacinth, lilies, myrtle, grasses, cattail, willows and Palmetto palms – along with the usual build-up of silt and sediment. Besides the obviously unsightly conditions created by the vegetation, the lakes have become virtually unusable for recreation or flood control.

The year-round tropical weather provides an environment where there is no interruption in the growing season, so the natural control cycle of a dry season causing weeds to die off does not occur. The unharnessed weed growth presents a constant challenge to those charged with lake management. Villahermosa (where the governor of Tabasco resides), had embarked on a city beautification project which included lake restoration. The lakes had grown to resemble marshes or swamps because of the lush over-growth of aquatic vegetation.

Over the years, floating weed masses that formed became so dense that they could be walked on. Cattail and palms grew seven to eight feet above the water line, and floating hyacinths created a finely knit, moving blanket that covered the lake’s surface and obscured the sun rays, further shading the lake. The lack of sunlight robbed the plants of the oxygen they needed to grow and facilitated the breakdown of submerged vegetation and root mass. As the weeds decayed they released nutrients to the organic matter on the lake bottom. The lakes became anaerobic which caused the fish to die.

Chemical control of the weeds was deemed not to be cost effective. Attempts had been made to remove this vegetation by mechanical means. Weed harvesters were used to remove the floating vegetation and haul it to shore. Another method that was employed just chopped up the weed masses with propeller-like blades. This left the debris floating in the water, to be scooped up by a standard weed harvester and disposed on shore.

Unless the debris was loaded into a hopper or trailer, it would have to be handled again mechanically to remove it from the shore. This method was messy, inefficient and did not remove submerged vegetation and its root system. Since much of the debris that was left in the lake included the plants’ reproductive systems, seeds, stems, nodes or buds along with the nutrients, the weeds were provided with an excellent opportunity to regenerate. A more versatile, efficient and cost-effective method to clean these lakes had to be found.

The State of Tabasco purchased a Model 4010 Versi-Dredge® transportable hydraulic dredge equipped with the Weedmaster® cutterhead attachment for removing aquatic vegetation, both manufactured by IMS of Prairie Village, Kansas, USA. The Weedmaster® chops the weeds into one to three-inch sections and pumps them to shore using the dredge pump.

The unit mounts directly to the dredge pump inlet door permitting unrestricted access of the chopped weeds and dredged slurry to the pump inlet. It consists of a steel shroud and cutterbar with a hydraulic motor direct driving the cutterbar without any reduction gears, belts or chains. The speed, torque and direction are controlled by the operator to suit the weeds and silt being handled. The rotating cutterbar is constructed of heavy wall tubing with hardened steel cutters.

Lakes in the City of Villahermosa were the first applications in Mexico where the Versi-Dredge® with a Weedmaster® attachment were used. The task of weed removal in these lakes was formidable. Before dredging, these bodies of water were almost totally overgrown with aquatic vegetation and the water was so low, they hardly resembled lakes at all.

The Versi-Dredge® was launched. As it moved forward a full cutterhead depth had to be cut through in order to float the unit. Fortunately the Model 4010 Versi-Dredge® requires only about a 20 inch draft to float. As the unit moved through the water, it cut down the floating weed mass islands, including the cattail and Palmetto palms that towered in its path, along with the floating hyacinths.

The Weedmaster® chopped the floating, emergent and submerged vegetation, even cutting up the cattails and the pulpy, barrel-like trunks of Palmetto palms. The Weedmaster® removed the vegetation along with the root mass and mud. The cutterhead spans eight feet and removes weeds and/or silt to a depth of about two feet at each pass. A containment area was built about 200 feet from shore, and as the vegetation was chopped, it was pumped with the mud through the discharge hose away from the lake precluding any rerooting or regeneration.

After the lakes have been restored with the Versi-Dredge® and Weedmaster® , regular maintenance with this IMS equipment will enable the residents of Tabasco to enjoy their lakes for many years to come. Although Mexico has the ideal climate to promote aquatic vegetation overgrowth, they are not alone. Lakes in the U.S. and throughout the world, especially in warmer climates, struggle to keep vegetation, silt and sediment from taking over.

As water quality issues gain greater prominence in the environmental movement, versatile, efficient and cost effective solutions offered by the Versi-Dredge® and Weedmaster® will be in greater demand.