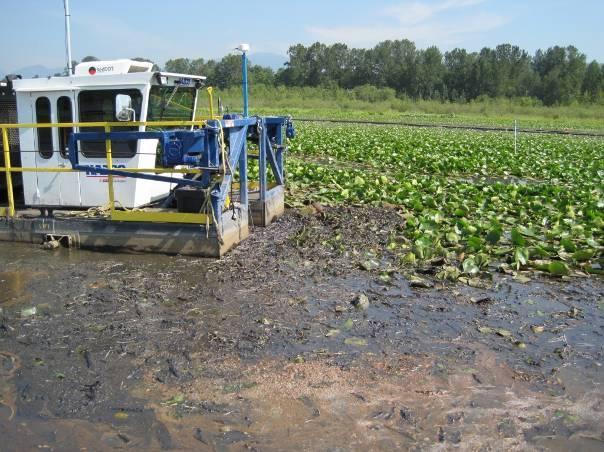 Burnaby Lake Regional Nature Park comprises 280 hectares in the Still Creek – Brunette River Watershed in Burnaby, B.C. The park has high ecological value, and consists of wetlands, low-land forest and Burnaby Lake. Numerous creeks flow into the lake, which acts as a sink for sediments transported by the creeks from surrounding urban areas. In 1972/73 the lake was dredged to facilitate the rowing course for the 1973 Canada Summer Games.

Since the 1973 dredging, the lake has continued to fill with sediments. The City of Burnaby commissioned a study in 1997 to assess the environmental implications of dredging the lake for environmental rejuvenation. The study recommended that the City undertake a pilot-scale dredging program, prior to initiating any full-scale dredging operations, in order to collect more information that would allow a better understanding of the technical feasibility, economics, and environmental implications of dredging Burnaby Lake. To this end, the City retained the consulting team of Associated Engineering, Enkon Environmental, and Hay & Company Consultants in the spring of 1999 to execute a pilot-scale dredging program. The main objective of this program was to conduct a short duration, but high production capacity, sediment dredging and processing operation that would allow for sufficient data to be collected. Associated Engineering was responsible for evaluation of sediment dewatering technologies, completion of a contractor prequalification process, tender documents, contract administration, and report preparation. Technical feasibility of a potential full-scale dredging program was assessed, considering method, feasibility and impacts of dredging, dredging rates, environmental impacts, process and implications for on-site sediment dewatering, and off-site solids disposal constraints. Trimax Residuals Management Inc., retained as the project contractor, was responsible for the dredging, sediment dewatering, and water treatment operations.

“The project”, relates Project Manager Larry Martin, “determined, from a technical perspective, that dredging of the lake is feasible and can meet the requirements of the Federal Department of Fisheries and Oceans and the Provincial Ministry of Environment Lands and Parks. The project findings have only recently been released and the client must now look at project cost estimates, restrictive dredging windows imposed by the DFO and extensive public hearings before determining the next course of action”.

The pilot dredging project removed approximately 2500 cubic meters of in-situ sediment from the lake with an IMS Versi-Dredge® auger suction dredge. The sediment-water slurry was then pumped to the dewatering site where the coarse organic material was separated from the slurry with an inclined screen and screw. The fine-grained solids were separated from the slurry using centrifuges to form a product with a solids content ranging from 25% to 40%. The centrate was treated to reduce the total suspended solids concentrations (TSS) to levels below those imposed by the Federal Department of Fisheries and Oceans (DFO), and the treated effluent was then discharged back to Burnaby Lake via Still Creek.

A silt curtain encircling the dredging site proved successful in preventing sediment migration down the lake. Lake water samples were collected on a daily basis and analyzed for turbidity, TSS, pH, conductivity and dissolved oxygen in order to determine dredging impacts. Dewatered sediment samples were tested for metals and hydrocarbons. To confirm that residual polymer (used to enhance the solids capture of the centrifuges) in the effluent would not be toxic to aquatic life, bioassay toxicity tests were performed on Daphnia magna and Rainbow Trout organisms.