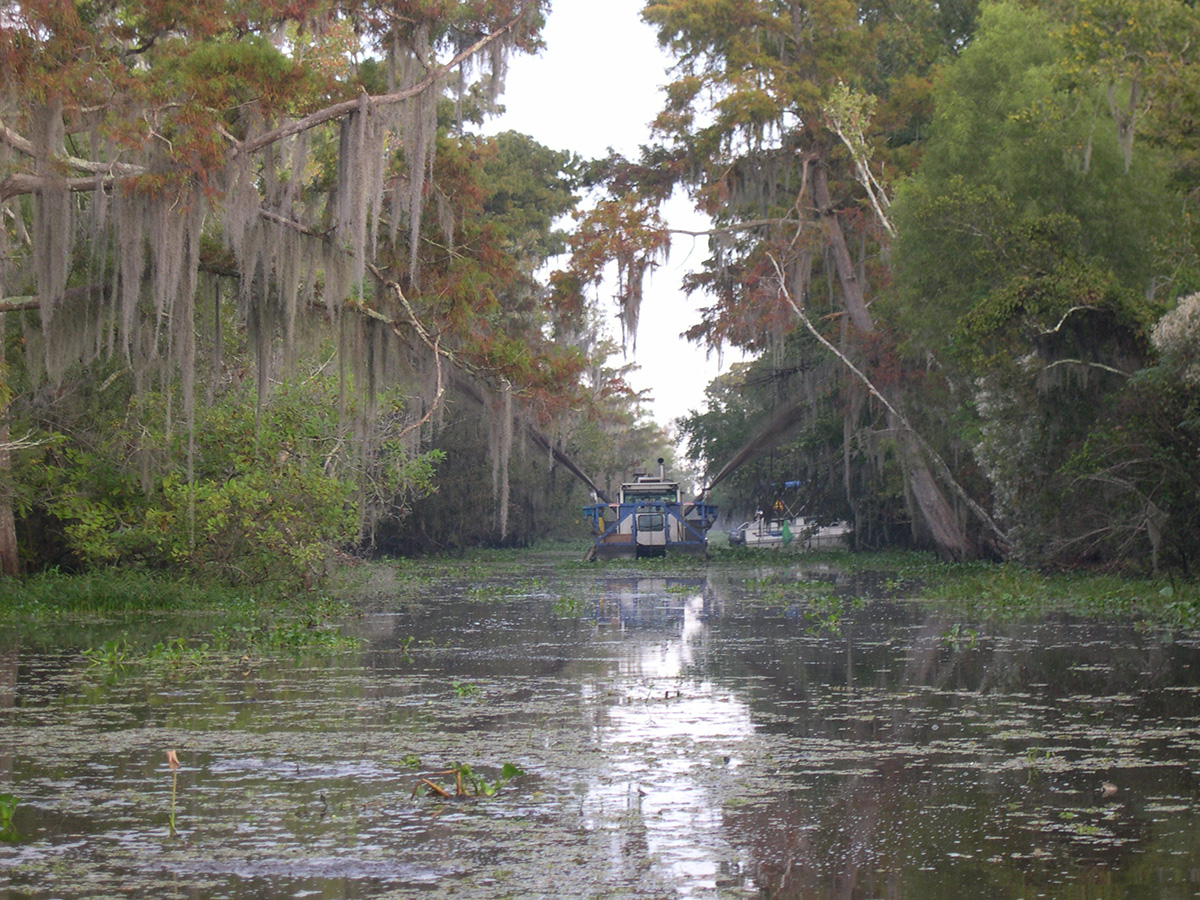 JEAN LAFITTE NATIONAL PARK, LOUISIANA– The Jean Lafitte National Park in Louisiana, USA faced typical waterway maintenance issues in their canoe trail canal system. Over time, silt build-up and displaced vegetation slowly filled in the canals making them un-navigable for recreationists. In order to prevent the canals from filling in completely, park management had to ensure that they not only retained active waterways, but also preserved popular land masses. They realized the process would likely take about 4 months, but were open to any solution that would provide the appropriate balance of dredging out the waterways and maintaining park terrains. The ultimate goal was to maintain the natural ecosystem while providing the best experience for park visitors to canoe, kayak, fish, hunt, or participate in any other outdoor activities. Mitchell Marine Inc., an experienced marine contractor serving the Gulf Coast of the United States, was the perfect company to tackle this project. Competing against companies using amphibious excavators and traditional land-based excavators, Mitchell knew there was a better solution. As an environmentally-conscious company, Mitchell Marine Inc. was confident that the IMS 5012 LP Versi-Dredge was the solution for the issues at Jean Lafitte National Park.

Mitchell Marine Inc. decided to use the 5012 LP for the National Park because it is ideal for dredging canals and narrow waterways where maneuvering in confined areas is an issue. The Starwheel Drive system allows the dredge to be completely self-propelled unlike cable driven dredges that require shore anchors. Due to the marsh-like qualities of the soil around the canals, a cable drive set-up would not have been effective or practical. The LP (low pressure) pump on the dredge is a fabricated steel pump with a rubber liner which allows the 5012 LP to pass up to 6” (152mm) solid material making it an effective option for debris filled waterways. The material within the canoe trail was primarily mud, decomposed vegetation, small gravel, oyster shells, leaves and twigs. The IMS 5012 LP Versi-Dredge pump was the ideal solution to dredge this area because it could pass a large quantity of these various materials without clogging.

The Jean Lafitte National Park Canoe Trail, the main site for this project, was very sensitive. It was crucial that Mitchell Marine understand not only the ecological impacts, but also the influence dredging would have on the park visitors. The 5012 LP Versi-Dredge was the suitable choice for the project due to its environmentally friendly features. The horizontal shrouded low-turbidity cutterhead on the 5012 LP can cut through light root masses and handle various sized materials without clogging up, but it can also minimize turbidity in the waterway. To further the environmental friendly effort, Mitchell Marine fitted the 5012 LP with the Broadcaster discharge attachment enabling the dredge operator to literally spray the dredged material to the edge of the canals. This process, commonly referred to as “spray dredging”, is widely accepted by US environmental agencies. According to a study by the Wetland Biogeochemistry Institute at Louisiana State University: “Sediment additions, either by natural or artificial means, represents one of the most promising and long term of the proposed actions to restore and protect wetlands. Organic matter accumulation and sediment addition interact to prevent salt marsh submergence. Spreading dredged material out on the marsh surface is one of the methods that has been proposed for supplying mineral matter to sediment starved marshes.”

In addition to increasing the depth of the canoe trail from eighteen inches to over thirty-six inches, the Broadcasting system had multiple long-term benefits. Rather than having the dredged material form unsightly piles along the banks, the 5012 LP Versi-Dredge dispersed the potential waste back into the natural landscape. This environmentally-sound solution was also visually more appealing to park visitors. Vegetation responded positively to the increasing canals depths and addition of sediment. The increasing depth of sediment enabled plants to grow, marshes to increase in depth, and canals to take shape.

The managerial staff at Jean Lafitte National Park was impressed with Mitchell Marine’s knowledge and said, “the IMS Versi-Dredge has provided the most ‘low impact’ of any dredging the park has experienced.” This was a crucial component since the park wanted to maintain the natural serenity and peaceful environment its visitors had come to appreciate.

The public took high interest in the Park when they saw these restorations and additions. New canals for kayaking, canoeing, and even hunting were created. The canoe trail at Jean Lafitte National Park is beautiful once again. Visitors are surrounded by the abundance of thriving plant and animal life.

Successfully dredging this sensitive canoe trail could not have been accomplished without the knowledge of Mitchell Marine Inc. and the technology and versatility of the IMS 5012 LP Versi-Dredge.