Shoring Up: City Employees get Beach in Lake Forest Ready for Summer 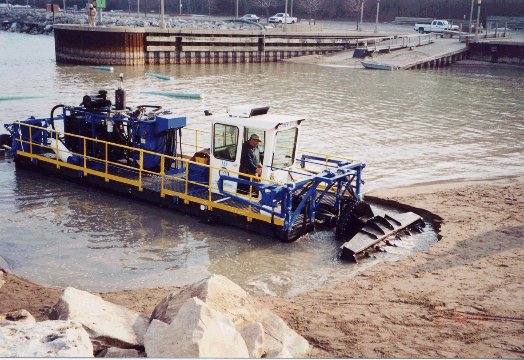 They carefully hosed off the sand, pebbles and debris from the 50-foot-long hydraulic dredge. The 25,000-pound miniature barge hung steadily from a crane at the Forest Park boat launch in Lake Forest Friday morning.

Two men who had been walking down the curving brick walkway ventured out onto a jetty for a better view of the procedure. Watching a handful of Lake Forest Public Works employees painstakingly guide the dredge onto a flat-bed truck while a bulldozer graded the beach in the background made for an exciting morning jaunt.

All the lake front activity was part of the annual push to get the beach ready for the summer season. It’s a team effort that started in March with the dredge, which removes sand from the boat launch, just in time for the pre-season opening this weekend. The beach officially opens for the summer on June 3; it closes Sept 4.

“Everybody takes a lot of pride in this park,” said Sally Swarthout, program manager in the Lake Forest Parks and Recreation, pointing to the members of the public works crew who were as careful maneuvering the dredge as a mother with a newborn. An hour later, the public works landscaping crew swarmed the beach area mulching, raking and generally ridding the 29-acre beach front of any evidence of winter damage.

The winter wreaks havoc on the beaches, said Dutch Lundy, parks supervisor. “We use a lot of man hours putting the sand back on the beach from the grass and pavers,” he said.

The city installed a silt fence last winter for the first time on the sand just off the wall which “helps keep the sand from blowing as much” onto the landscaped non-beach areas, Lundy said.

Despite that precaution, “it’s a massive clean-up,” Swarthout said.

Already the area looked nearly perfect, but just wait, Swarthout and Lundy said, it will be “sparkling” by this weekend, which forecasters are predicting will see 80-plus degree weather.

Both Lundy and Swarthout grew up in Lake Forest and their pride in the city’s lake front park is evident. They are not alone in their love of the city’s beach. All employees – and residents, too — take pride in the park, said Swarthout.

“This is the crown jewel of the park system,” said Swarthout, a self-proclaimed “beach girl” who has gone to Forest Park Beach all her life. This is the first time in six years Swarthout will not be on the beach daily as beach supervisor. This year, that honor goes to Chlyla Wilson.

The massive beach clean-up started with dredging in March and takes some three weeks to complete, based on weather and wave conditions.

“This is a major piece of equipment we purchased several years ago,” Lundy said as the dredge lowered slowly to the flatbed. The rack in front of the dredge churns up the sand on the lake bottom, then pumps essentially work like a big vacuum sucking the sand into a large black hose that drains into an underground system of pipes. The pumps force the sand onto the south end of the beach, Lundy said.

This year, city employees removed an estimated 3.5 feet from the boat launch using the dredge. After the dredging is complete, it takes another two days for the bulldozer operator from Lake County Grading to push the sand back into the lake and smooth out the beaches. During the summer, the beach is regraded and the sand turned over every Friday morning by city workers.

In anticipation for this weekend, city employees have set up more than 100 benches, 50 picnic tables, and 50 garbage containers that they spent the winter refurbishing. Three volleyball nets also will be in place and the lifeguard stands will be set up and ready for the first day of swimming and boating.

The city employs 20 lifeguards, including management staff; there are 10 lifeguards on duty at a time. “We’ll go down to eight on Mondays or during the week if its not that crowded,” Swarthout said. “If there’s a large number (of people) in the water, we’ll put two lifeguards in the stands and put one in a kayak in the water and another in a rescue boat in the water.

This summer will be the second that Forest Park Beach has used Swimcast to monitor bacteria levels continuously. Official water quality readings are taken twice daily, at 9 a.m. and 1 p.m. If the level of E. coli is higher than 235, the red flag is raised and the beach closed. Red flags also are posted for swimming if there is two or more inches of rain, a strong undertow, or a North Shore Sanitary District overflow.