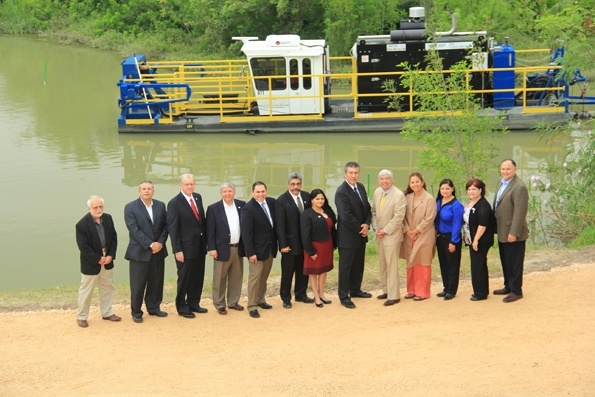 Along the banks of the Cemetery Resaca in the historic Old City Cemetery in Brownsville, the Brownsville Public Utilities Board officially marked the launch of the Resaca Restoration Project. BPUB workers, special guests and residents from the neighborhood attended the ceremony marking the cleanup efforts.

After the speeches had concluded, Mayor Martinez asked everyone to join him along the resaca banks. With bull horn in hand, he called out to the dredger floating in the water, “Gentleman, start your engine.” The man at the helm of the dredger responded by sounding off twice with the boat’s horn before starting up the dredger’s engine.

Attendees were then granted access to the work area to get a closer look at the operation. They were able to view the darkened water coming directly from the resaca being spit into machinery and then the resulting clear water coming out another pipe and being returned into the resaca.

This is just the first step of a long process. The dredging of the Cemetery Resaca is estimated to take about three months, but that largely depends on what is found in the resaca. Large debris necessitates manual removal because it is not able to be suctioned through the dredger. Also, the amount of sediment that needs to be removed could also factor into the schedule. The most important thing is doing the job right and removing all unnecessary material before moving on to the next resaca.