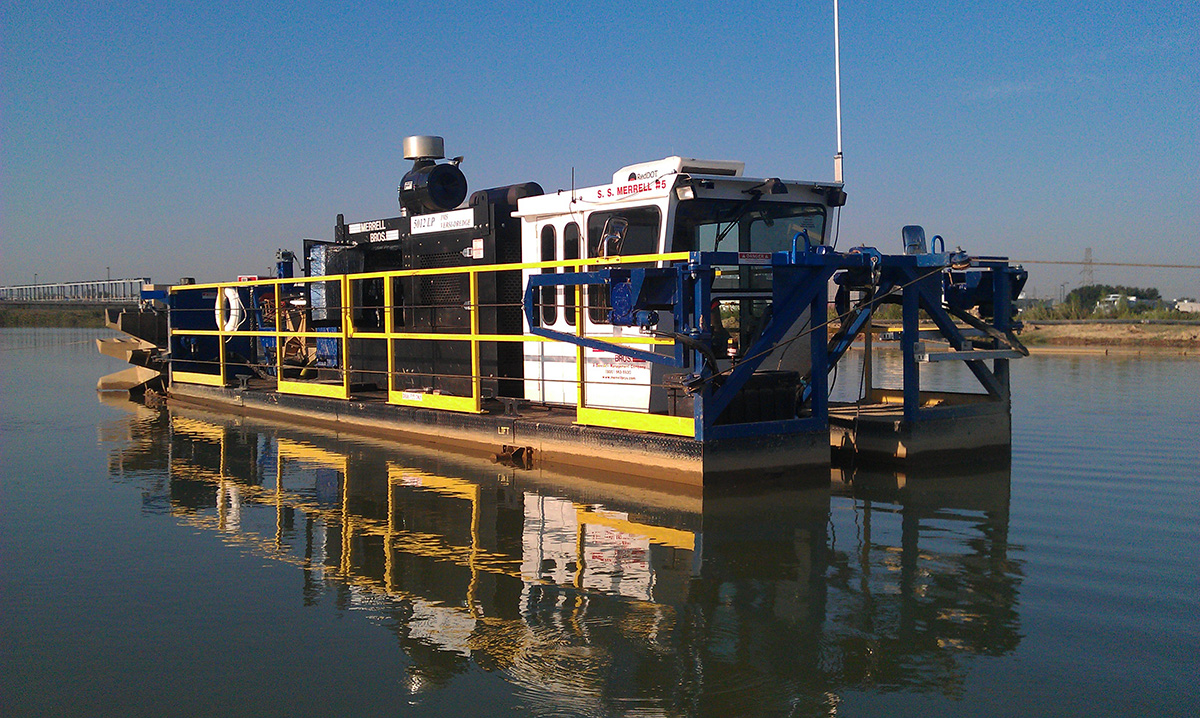 Two companies – L&A Contractors and Merrell Brothers – have been working on dredging two city lagoons with the worst sludge problem.

Bert Kuyrkendall, director of engineering for the city, said the project has been more difficult than originally anticipated, forcing the city to spend approximately $5 million on what was expected to be a million-dollar problem.

“Work has progressed, but it has taken longer than we anticipated, honestly,” Kuyrkendall said. “It’s more sludge than we originally estimated, and it has proven more difficult to dewater.”

Dewatering the lagoon sludge is accomplished with either a belt press method, which effectively squeezes the water out of sludge, or with a centrifuge utilizing special polymer compounds to assist with separating the solids from the water.

“The nature of the sludge – it’s not very dense – makes it very difficult to dewater,” Kuyrkendall said. “We’ve done everything we can to expedite the process. We’ve pulled in additional contractors.”

Some of the sludge slowed work, due to its difficulty to dewater, creating the need for Merrell Brothers to be hired to use specialized equipment to remove the difficult deposits of sludge.

Kuyrkendall said he expects contractors to have work completed within the next four weeks.

Last week, City Council approved borrowing $3 million on a short-term loan to pay for the dredging work. The loan will be paid off when the city moves $12.5 million in 20-year bonds out of the project fund account as part of funding Phase I of the Comprehensive Sewage and Water Improvement Project (COMSWIP), according to Connie Everett, the city’s chief financial officer.

“What we’ll do when we get the proceeds from that bond issue, we’ll pay off the loan,” Everett said.

Everett said despite the amount of sludge being nearly four times the original estimate, the city should be able to absorb the extra cost without greatly increasing rates. The COMSWIP project is conducted in phases so the city does not have to drastically raise rates to fund the sewage and water improvements, according to Everett.

City Council members have been glad to see headway made on tackling the odor, but also on their plate is deciding what type of new treatment facility the city will build. The council faces a May 31 deadline to decide the type – either a land application or a mechanical processing facility.

Ward 5 Councilman Henry Naylor said the council is focusing on getting a definitive answer to the city’s sewage problem.

“We’re discussing what approach we will take to process our waste,” Naylor said. “We know residents are concerned about what decisions will be made to rid us of this smell permanently. We also have to consider the longevity and the overall costs of these options.”
Long road to a sewage solution

Like the murky lagoons, officials have had difficulty seeing the bottom of the city’s sewage problems.

In a deal brokered by the Mississippi Development Authority, Dothan, Ala.-based USA Yeast was brought to Hattiesburg in 2001. The city contracted to treat all of the company’s waste in a water purchase and effluent agreement.

In 2002, the city agreed to borrow $3.4 million to upgrade the lagoons to be able to treat USA Yeast’s waste, with the company repaying the loan in monthly $35,000 payments.

A 2007 report by United Water identified deficiencies in the city’s sewage treatment and suggested replacing the lagoon aerators, lift pumps and generators. The report also stated waste from USA Yeast had “noticeable effects” on the lagoon’s ability to process waste.

After reports from city administration and outside sources, the city filed suit in April 2011 in U.S. District Court to break its contract with USA Yeast.

In September 2011, the City of Hattiesburg requested proposals from contractors to remove approximately 3,300 dry tons of sludge from the sewage lagoons. The sludge was identified as the culprit producing a foul odor that frequently blanketed the city.

Hattiesburg-based L&A Contractors was awarded the $1.3 million contract to remove the sludge. In addition to a new $3 million air diffusion system installed in one of the lagoon cells, removing the sludge was supposed to fix the smell problem.

The city was then fined $32,500 by the Mississippi Department of Environmental Quality in October 2011 for violations related to its wastewater treatment.

In December 2011, a new agreement was reached between the city and USA Yeast.

The company was required to construct an $8 million pre-treatment facility, funded through a $5 million grant through the MDA and a $3 million loan from the city.

The agreement put the responsibility for treating the waste on USA Yeast, City Council President Kim Bradley said in 2011, after the city was responsible for dealing with the results of USA Yeast’s untreated waste being discharged in the lagoon for a decade.

However, the sludge, specifically in cells that held untreated waste from USA Yeast, proved much more difficult to dewater, according to Kuyrkendall.

Facing a May deadline for being in compliance with MDEQ requirements, the city held a special meeting in January to approve an approximately $1 million contract with Kokomo, Ind.-based Merrell Brothers.

As part of the contract, Merrell Brothers charged the city $760 per dry ton of sludge removed.

In total, the contractors will have removed approximately 11,000 dry tons of sludge combined, Kuyrkendall said.

“By the time this project is over, which we anticipate will happen within the next three or four weeks, it will span over into April, we will have removed about 11,000 dry tons of sludge,” he said.

Since the double-team effort on the sewage lagoon began, Kuyrkendall said the companies have put a major dent in much of the sludge.

But to ensure all remaining sludge is removed, the city contracted with Hattiesburg Resources Group to map the sludge content of all the lagoons for a price not to exceed $75,000.

Kuyrkendall said once the remaining sludge is mapped, the city will then send a new request for proposals to finally remove all the sludge from the lagoons.