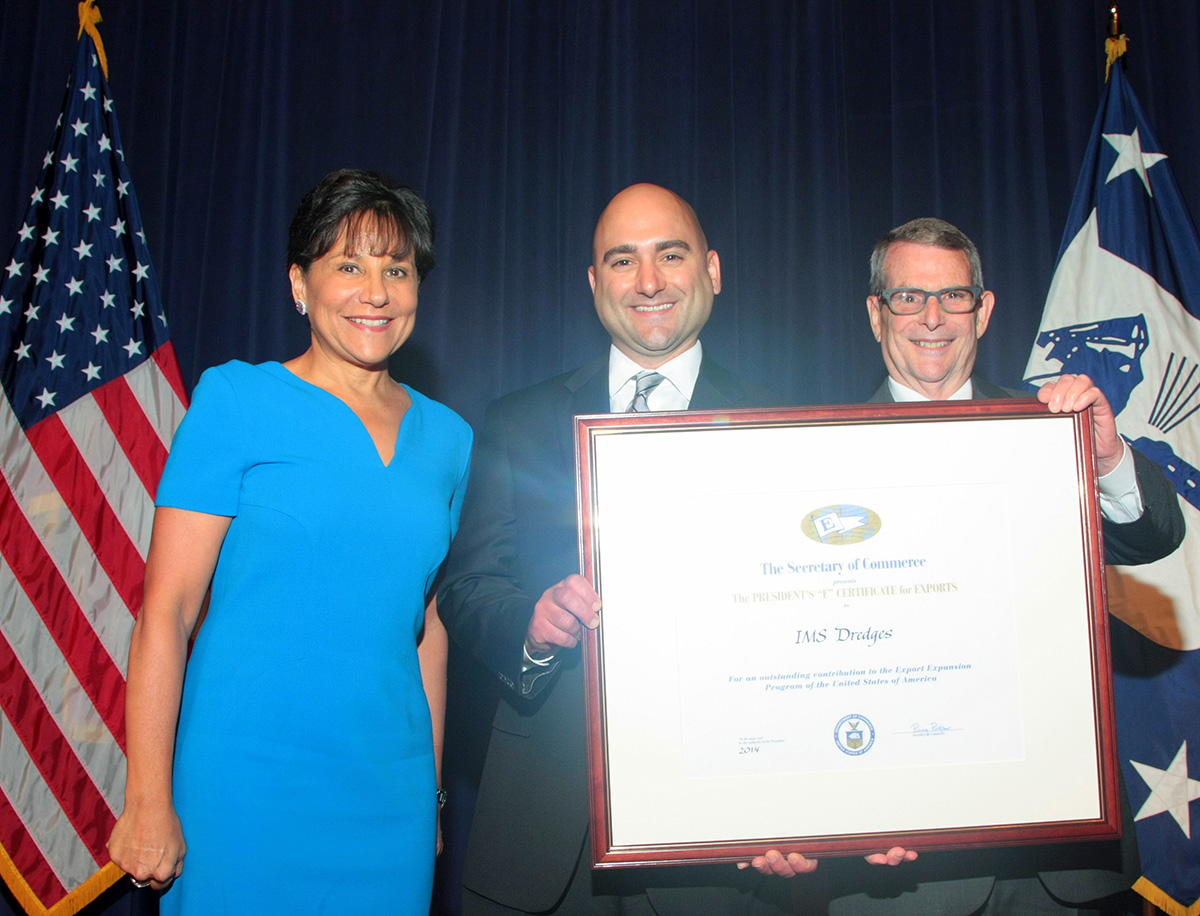 WASHINGTON – U.S. Secretary of Commerce Penny Pritzker presented IMS Dredges with the President’s “E” Award for Exports at a ceremony in Washington, D.C. The “E” Awards are the highest recognition any U.S. entity may receive for making a significant contribution to the expansion of U.S. exports. During the awards ceremony Secretary Pritzker gave special recognition to IMS for their exporting success.

“Exporting is what drives our growth, and we are honored to receive the “E” Award,” said Ryan Horton, IMS Global Sales Director. “IMS exported its first dredge to Thailand in 1988. By 1992 over 25% of our business was from exporting and in the past 4 years well over half of our sales are from exporting.”

“IMS Dredges has demonstrated a sustained commitment to export expansion. The “E” Awards Committee was very impressed with IMS Dredge’s innovative design of products specifically for export. The company’s dedication to solving logistics challenges was also particularly impressive. IMS Dredges’s achievements have undoubtedly contributed to national export expansion efforts that support the U.S. economy and create American jobs.” said Secretary Pritzker in her congratulatory letter to the company announcing its selection as an award recipient.

“To be a successful at exporting you need to have a boots on the ground, 24/7 mentality and most importantly your upper management needs to be committed. In addition you need the support of the U.S. Dept. of Commerce, U.S. Advocacy and U.S. EximBank. Without their valuable assistance we would lose our competitive edge in the global market place,” said Horton.

U.S. exports of goods and services hit an all-time record of $2.3 trillion in 2013. Nationally, jobs supported by exports reached more than 11 million last year, up 1.6 million since 2009. Launched earlier this month, NEI/Next, a new phase of President Obama’s National Export Initiative, works to boost economic growth and support additional American jobs by assisting more U.S. companies of all sizes in exporting to more markets across the globe.

President Kennedy revived the World War II “E” symbol of excellence to honor and provide recognition to America’s exporters. The “E” Award Program was established by Executive Order 10978 on December 5, 1961. Four years of successive export growth and an applicant’s demonstration of an innovative international marketing plan that led to the increase in exports is a significant factor in making the award.

U.S. companies are nominated for the “E” Award for Exports through the Department of Commerce’s U.S. and Foreign Commercial Service office network, located within the Department’s International Trade Administration, which has offices in 108 U.S. cities and more than 70 countries to help U.S. exporters.