NORWAY – An IMS 7012 HP Versi-Dredge was used to create new ponds and canals in the Slevdalsvann nature reserve. This was particularly beneficial for the birds and other wildlife in the area. 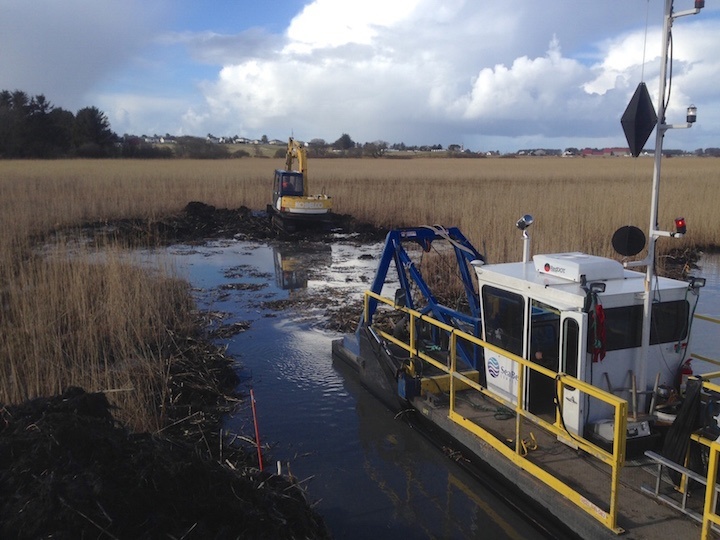 Slevdalsvann is a natural part of the internationally important wetland system Lista (Lista RAMSAR site), and is a central location for migratory bird species. Slevdalsvann has been lowered and drained several times in order to acquire agricultural land. Overgrowth of phragmites has resulted in its reduction to just 2.5 acres of the water table. It has long been an aspiration to restore this important wetland area in Lista. In late 2014 the County Governor awarded the restoration job to the contractor Seabed Services AS, who used their IMS 7012 HP Versi-Dredge for the project.

The work has now been completed and the County approved the new dams and canals on April 10th. The restoration comprises 14 hectares of new water surface in the form of dams and canals. This is a significant increase compared to the last remnant of the original water table of just 2 hectares.

Work on the first channel began in December 2014. In addition to the 7012 Versi-Dredge, a large volume was dug up with excavators and removed with tractor and trailer.

There have been few previous projects to glean experience from so this project has been somewhat pioneering in nature. The contractor focused on finding solutions for equipment as and when challenges were encountered. This has been accomplished in an exceptional manner.

The County Governor now wants to facilitate grazing and other active management of the ponds and surrounding areas. We can thus finally get a welcomed variety in the area that for so long has shown signs of rapid overgrowth.