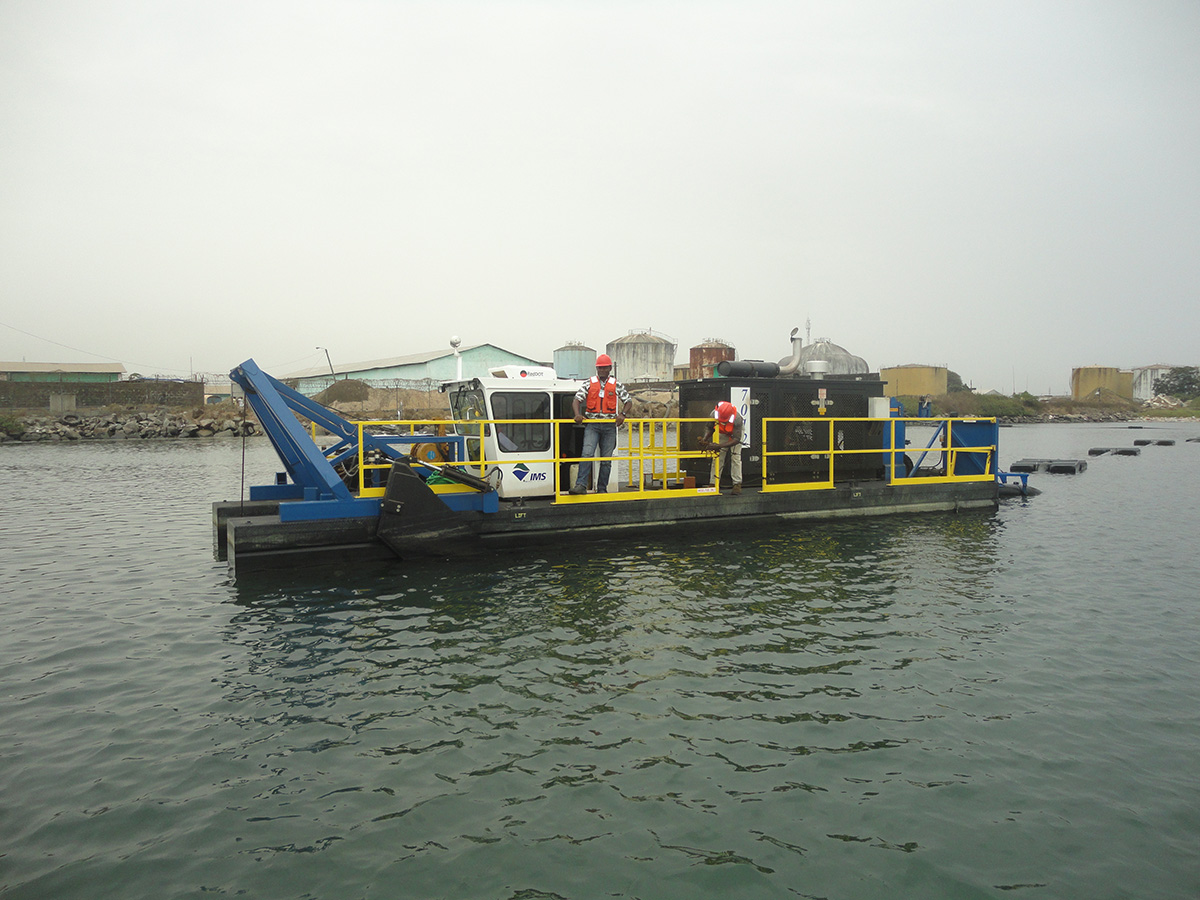 MONROVIA, LIBERIA – BAM International, a Dutch construction company, was awarded a contract by APM Terminals to operate a 25-year concession at the Port of Monrovia by the Liberian Government. BAM International signed a contract with Eligoz Industrial Liberia to supply 100,000m3 (130,795 yds³) of sand for the construction of a 600 meter (1,969 feet) quay wall for a container terminal at Port of Monrovia. After extensive research of dredge manufacturers in Europe, Asia, and the United States, Elias Okolie, Managing Director of Eligoz Industrial, invested in the IMS Model 7012 HP Versi-Dredge with 254mm x 305mm (10″ x 12″) sand pump and 9.1m (30 ft) standard operating depth to fulfill the sand contract.

Eligoz Industrial is the first company to acquire and deploy a modern hydraulic dredge of its class in Liberia. After only one month of operation, Eligoz Industrial has received multiple proposals from Liberia and other countries in West Africa to redeploy the dredge for other projects. Eligoz is already in the process of acquiring a second Model 7012 HP Versi-Dredge for other sand mining projects in West Africa.

“Everything is going very well. Our only problem is the size of our site. We are not able to utilize the dredge full time,” said Okolie.

“I am grateful to all of you. You did so well for me by making sure this deal sails through because I was really disturbed when the issue of the confirmation came up, but you made it possible. I cannot thank you enough. This would not have been possible without your support. I am sure we have more deals to come by the grace of God. You have worked so hard for me it feels as if we have known each other for many years,” said Okolie.”

In addition to financing, IMS provide onsite training by a factory service technician for five days. After the initial training, IMS Dredge’s third party marine services company, Underwater Professionals, deployed civil engineers to the site to perform topographic and underwater sonar surveying, prepare the client’s bid documents and assist in bid negotiations. The company then took over the operation of the dredge for the next 60 days to ensure maximum productivity and fulfillment of the client’s contract.

“Nothing makes me happier than to see an entrepreneur like Mr. Okolie build a successful business division with the support of our entire staff and resources. We were able to supply equipment from stock, quickly ship it to Liberia, provide a dredge master for 60 days after our initial training, and more importantly were able to package this all into a 1-year deferred payment L/C. This is what separates IMS from the rest of the industry. We are not just a supplier, but are a value added partner that offers a turn-key solution to all our dredging clients” says Ryan Horton, IMS Global Sales Director.

Reprinted from The Liberian Times