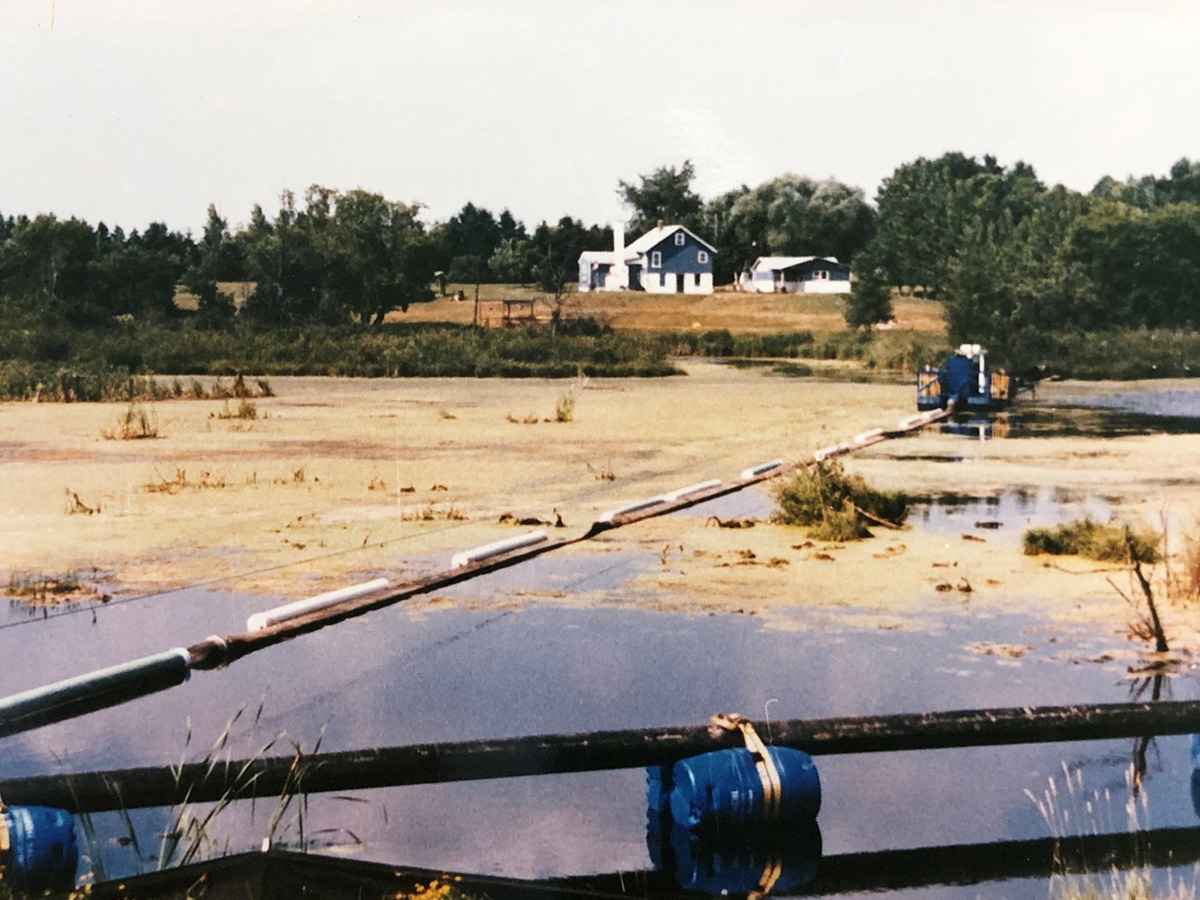 When the Wisconsin Department of Transportation (WDOT) began construction of State Highway 45 West near Clintonville, the project appeared to be routine. Once underway, however, the project took on an unusual course:

The crew, having graded the road with base fill the night before, would return to the job site each morning to find the grade two feet low. This phenomenon continued for two straight weeks until it was discovered that the weight of the fill was pushing the underlying soils (thick black mud and peat moss) into the adjacent, ten acre Brady Lake.

The lake, prior to the start of Highway 45’s construction, averaged 18 feet in depth. Upon discovery of the shifting soils, areas of the lake averaged less than nine inches of water cover. The once pristine fishing lake, home to many species of wildlife and dotted by a few residences, was in danger of dying. As a result, the Wisconsin Department of Natural Resources (WDNR), responsible for this state-owned lake, intervened.

In conjunction with the WDOT, the WDNR evaluated different methods of restoring Brady Lake. Due to the physical size of the property, the amount of material to be removed, and the spoil handling issues involved, hydraulic dredging was selected. Traditional heavy equipment (draglines or barge mounted excavators) alternatives would have created either too much potential for spillage and spoils handling problems, or it would have been detrimental to the existing lake conditions by resuspending much of the material to be removed. Draining the lake and cleaning it out was not an acceptable option.

The scope of work called for a floating dredge to excavate material to a depth of 18 feet and pump it through an enclosed pipeline 3,000 feet to a dry borrow pit. The difference in elevation between the two areas was 110 feet. The WDNR required that any water decanted from the spoils area to the lake be returned at suspended solids levels no more than five parts per million higher than pre-existing lake conditions.

The WDNR/WDOT awarded the work at Brady Lake to J&S Dredging of Arpin, Wisconsin. In July of 1991, J&S’s owner, Mr. Jim Mann, mobilized the Model 4010 Versi-Dredge™, manufactured by Innovative Material Systems, Inc. (IMS) of Olathe, Kansas. Unique for a one-truck transportable hydraulic dredge, it operated standard to a depth of 20 feet.

Once on site, the dredge was placed in the lake and the windlass travel cable anchors set. The pipe was laid from the lake through the highway’s culvert and to the borrow pit. On shore, a booster pump was added to maximize performance. Dredging began shortly afterwards with the actual sediment removal relatively routine. There were, however, two areas of added attention: travel cable rigging and vegetation removal.

As Brady Lake is kidney-shaped, one end having a width of nearly 1,000 feet and the other end having only a width of eight feet, a standard, four point, bank-anchored cable travel system was not possible. In its place, a three-anchor cable travel system was used; two bank anchors in the rear, connected by an adjustable cable and positioned with tensioners to control lateral movement and a forward central anchor with which to winch the dredge ahead. This configuration provided a pie-shaped cut needed to perform the job.

Nearer the center of the lake, cattails had formed into several floating “islands.” These weeds, typically problems for dredge pumps, were easily uprooted by removing the spoil from underneath their roots. IMS’ patented winglet impeller, designed to pump trash and long, stringy objects, then moved them through the pipeline and into the spoils area. Cattails would, however, occasionally wrap around the cutterbar and have to be cut off two to three times a day.

J&S devised an ingenious system to return the water in spoils area to Brady Lake at a suspended solids level that were no more than five parts per million from existing lake amounts.

The dry borrow pit was divided by a dike into two 300 foot wide by 1000 foot long cells. The slope of the dike ran from three feet at the discharge end to eight feet at the overflow end. At 200 foot intervals, a horizontal row of hay bales was put down. The hay bales would progressively filter water as it made its way toward the overflows. At the overflow, a silt screen was put down to further filter any remaining water.

For four hours a day water was pumped into one cell and then the pipeline’s flow was diverted, using a gate valve, to the other cell for the remaining four hours. After leaving the material to settle overnight, irrigation pumps were used to pump the water to an adjacent 35 acre farm field. The land, covered by vegetation and sloped toward the lake was lined on the perimeters with hay bales that channeled any excess water to the lake. The water entering the lake met all of the WDNR’s suspended solids criteria.

Since the completion of the Brady Lake project, J&S has completed numerous dredging projects in both the pristine water and the industrial wastewater sectors. According to Jim Mann, “The Versi-Dredge™ has been a great addition to our business. We diversified our revenue stream and provided a profitable service that was often requested by the customers of our sister company J&S Liquid Systems – haulers of home, municipality and dairy waste.”