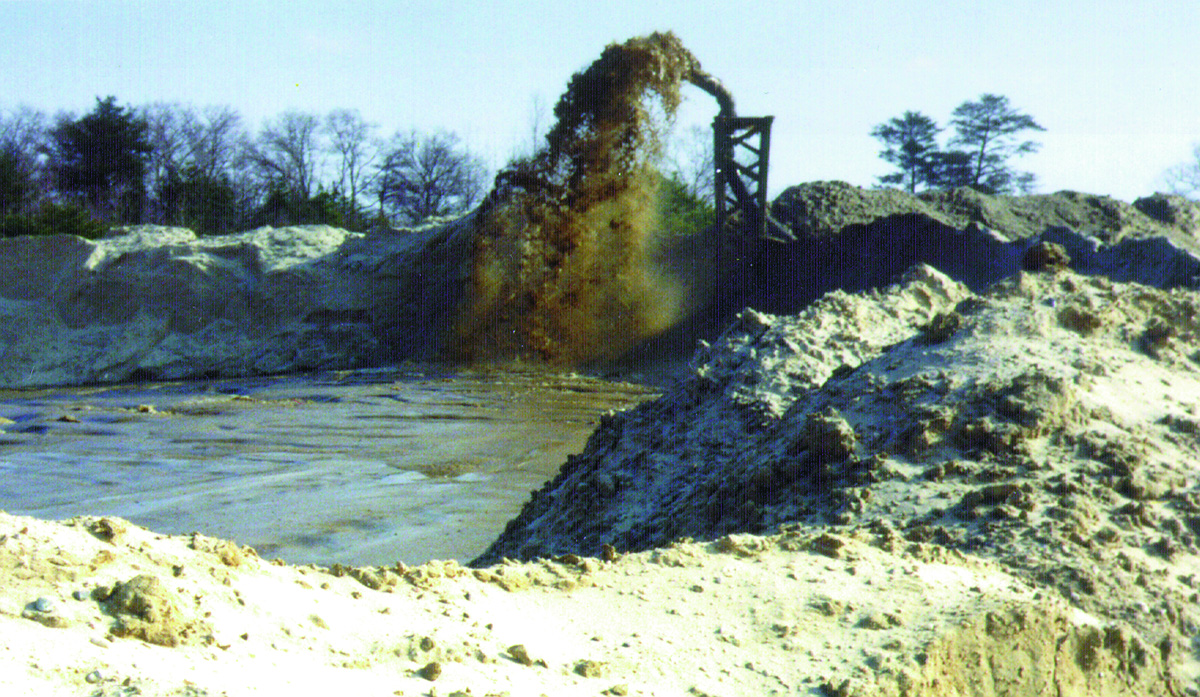 “The Versi-Dredge® is the most cost-effective piece of equipment to remove sand from underneath a water cover.”

With 24 years of experience in the contracting business under his belt, Delmer (“Nick’) Nickels, President of Bond Construction, Inc. of Wyoming, Michigan, is well-acquainted with both mechanical and hydraulic excavating equipment.

When a recent project required underwater solids removal, specifically mining sand, he considered dewatering and then excavating the material by mechanical means, but found that a Versi-Dredge® transportable hydraulic dredge provided the most cost-effective solution.

The private mining project required dredging two, three-acre lakes for sand to be used in road topping and filling applications. Over one million yards of sand is expected to be mined from one of the lakes, about a half-million from the other. Nickels uses the material in his own utility pipe work for back fill in trenches and for sub-base under pavement projects. He sells the sand to other contractors as well.

In lakes, this size mechanical excavation equipment like draglines, trackhoes, etc., have limited reach. Mining with scrapers and dozers requires dewatering around-the-clock to keep the water table down so that the machinery can excavate, which is a labor intensive, costly method.

In contrast, the dredge mines the entire lake and pumps the material to a discharge area where the runoff can be returned to the lake. Trucks transport the sand directly to a job site or other contractor. Fewer people would be required to run the dredge than would be necessary for the heavy equipment/dewatering scenario.

Because of its high production, ability to excavate abrasive materials and portability, Nickels chose a Model 5012 Versi-Dredge® transportable hydraulic dredge, manufactured by IMS of Kansas.

The Versi-Dredge® uses a hydraulic, submersible 12″ radial fan pump mounted at the end of the boom behind a shrouded, horizontal cutterhead. The pump is rated at 4,500 gpm slurry with a maximum T.D.H. of over 100 feet.

The dredge functions are controlled by a diesel/hydraulic power unit driven by a Cummins Model 6CTA turbo-charged diesel engine with 250 hp at 2,400 rpm. A heated, air-conditioned operator’s cab is standard.

Nickels’ Model 5012 was equipped with a Starwheel™ drive self-propulsion system that replaces the standard cable drive. This system is superior to spuds in that it can move much more quickly to new areas and can turn in any direction to a new position. It operates directly into the material to be dredged without any assistance from the shore. It also does not materially affect the portability of the dredge itself.

There are a number of challenges encountered in pumping sand; such as its high density and abrasiveness. The Versi-Dredge® has a 12” abrasion-resistant pump fabricated from AR steel to as high as 600 BN (abrasion-resistant pumps are standard on IMS dredges). The pump has no seals to wear, can cavitate, and can be run “dry” indefinitely without damage.

The unit was also equipped with a standard IMS excavator bidirectional cutterbar, which is mounted directly to the pump case inlet door. It is designed to cut through and excavate materials ranging from hard-packed clay and compacted sand to soft sludge.

It may be operated in reverse, which causes it to dig into the material – very useful when extremely hard material is encountered which a cutterbar might tend to “walk over.”

The Versi-Dredge® pumped the sand at a T.D.H. of nearly 30 feet to a spoil area some 600 feet away. As the sand discharged, the water ran off, leaving quickly accumulating piles of the material. A dozer and end-loader worked in concert to keep up with the production as they removed the sand to be sold.

Based on his positive experience with the Versi-Dredge®, Nickels expects to continue using it for future sand mining and other dredging projects.

Along with the dredge’s production and reliability, Nickels mentioned its ease of operation and how simple it is to change wear parts in the field. Also, the unit can be transported within permissible highway limits in one piece.

Nickels was particularly impressed with IMS’ service and technical support. He knew his needs would be responded to courteously and expeditiously. To sum it up Nickels said,

“The Versi-Dredge® is the most cost-effective piece of equipment to remove sand from underneath a water cover.”