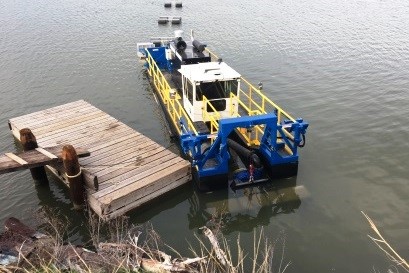 HOLDREGE, NE USA – Ellicott Dredge Technologies (EDT) is pleased to announce the sale of an IMS Model 5012 HP Versi-Dredge® to Central Nebraska Public Power and Irrigation District (CNPPID) to clean out Jeffrey Reservoir, which is the regulating reservoir for the Jeffrey Hydroplant. The dredge was purchased after a successful three-month lease-purchase trial. Since the hydro-irrigation project began operations in 1941, sediment has accumulated in the northern part of the lake, primarily between the lake’s inlet and outlet.

The Versi-Dredge will be used for annual maintenance in the reservoir to give boaters year-round access. Previously there was less than three feet of water over a large area, which blocked boaters from getting to the other side of the lake except through a narrow channel.

CNPPID leased a horizontal dredge from another supplier and had an option to buy the dredge by applying all rental payments towards its purchase. However, instead of executing the purchase option, they returned the dredge to the other supplier and opened a new tender for a three-month lease. After three successful months of dredging with an IMS Versi-Dredge, Central Nebraska exercised their option to purchase the IMS unit.

“It is a bold statement when you return a dredge after three months and then purchase from the competition. We are very pleased with CNPPID’s decision to purchase the 5012 HP Versi-Dredge, which is more durable, more productive, and has less downtime than the competition due to our Pump Defender™ self-cleaning debris guard technology, which reduces downtime in debris rich environments,” said Ryan Horton, EDT Vice President.

“We often hear from buyers ‘I can buy a dredge from _____ for less’ and I always tell them the initial purchase might be a little less expensive, but once you add in downtime, additional labor, higher maintenance costs, and lower production the competition is actually more expensive. We run the numbers and we are always the better value. A dredge is a 30+ year investment,” said Horton.