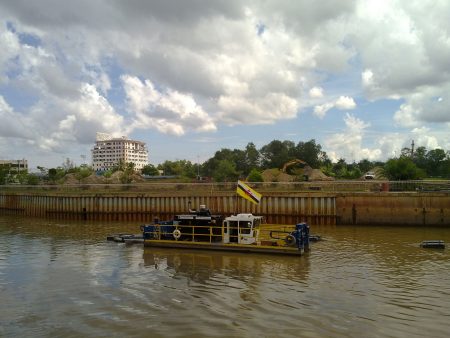 NEWS FLASH: BRUNEI – Bandar Seri Begawan – Brunei might have just found a solution to “better control” flood situations, as a new, efficient and economical dredge has arrived in the Sultanate to deepen and de-silt rivers, lakes, coastal areas and marinas.

Dredging the water areas, such as rivers, will also provide easier access for boats to stream along, said a consultant for the machinery yesterday.

Innovative Material Systems (IMS) Dredges Authorised Regional Representative A Najib Ariffin from Malaysia told The Brunei Times that due to erosion, rain and flooding, sediments and silt in bodies of water would accumulate up to the surface, causing the width of the river to be narrowed.

‘This is what has happened to the Gadong river, and that is why one local company in Brunei is working on a project with the government to extract the silt and sediments,” he said. adding that the excess material would be pumped out by the machine.

He said that dredging the Gadong river has been going on for about a week, and has been “working well”. He added that material dredged from bodies of water such as clay and sand could be used to cover eroded places and reclamation of land.

Although Ariffin said that modern development had a role to play in the erosion of river banks, causing the accumulation of sediments and silt, he said: “Development has to go on as it is a human requirement. (Therefore) using the machine will help to correct the problems.”

He explained that the machine had a cutter-head-arm which dredges directly into the river or water bed, efficiently removing excess sediments, which will then be pumped out to a designated dumping ground.

To ensure that Brunei rivers’ water levels were maintained, dredging needs to be conducted regularly, he said. “This will help Brunei rivers recover depth, and to make the rivers more pristine,” he said. Ariffin said that dredging would also help to improve marine life in the waters.

‘Dagupan in the Philippines has been using an older model of this machine for about 8-10 years now, and over time, the people have noticed an increase in the number of fish in the water,” he said.

He said that this was because through dredging, there would be more volume of water which could increase the productivity of marine life.

The machine is very “user-friendly”. “Within five to seven days, the local operator (staff of the company who purchased the machine) completed the training by technicians as there were no complicated controls in the machine.”

“The machine functions very logically. If you know how to use an excavator, it will be easy to operate the machine,” he said.

Speaking on excavators, Ariffin said that although excavators could do the job, the dredging machine was more efficient as the work was done in shorter time. He said: “Production per hour is two to three times faster than that of using an excavator.”

He added that using the dredging machine to extract sediments and silt would not disturb the river beds, as the machine had monitoring controls that indicated how deep the beds were. “This means that the cutting action from the machine would dredge without irregularly cutting through the river bed,” he said.

Meanwhile, he added that the dredging machine could be used to maintain the accessibility and beauty of Kampong Ayer.