Dredging is common in navigable waterways, but the project underway at the Napa Sanitation District property in southern Napa County is a little bit different.

The dredging is taking place in a vast sewage treatment pond. And the material being removed is biosolids, which is another way of saying sewage sludge. 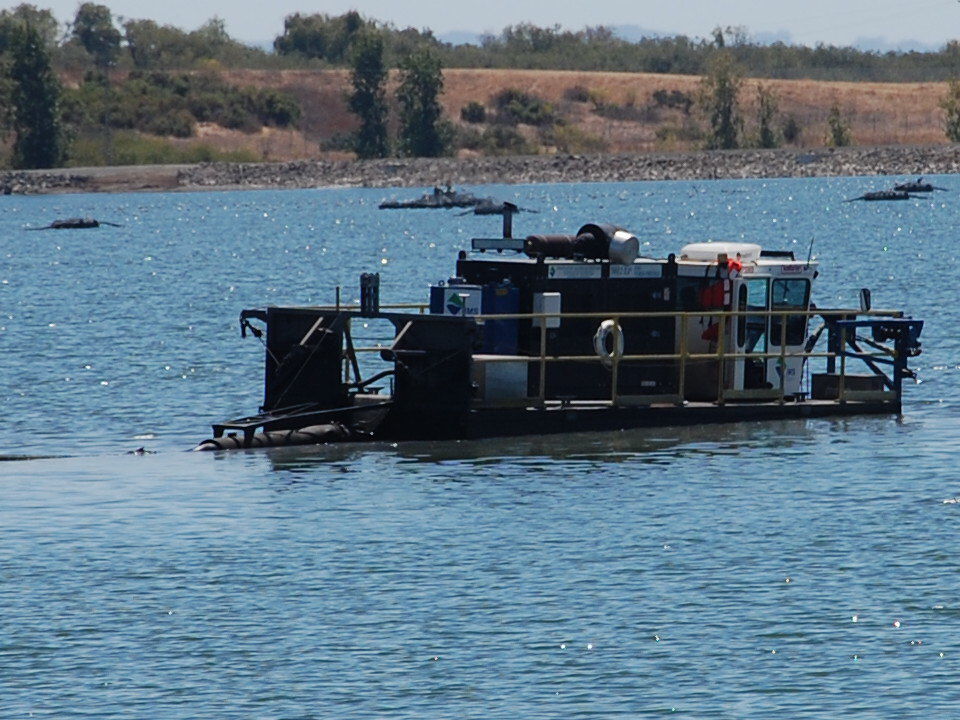 About 3,500 tons of biosolids will be piped from the pond this summer to be dewatered. It is ultimately trucked a short distance and spread over a NapaSan field where a farmer grows sorghum.

Dredging will improve wastewater treatment in the pond and eliminate exposed solids that form with fluctuating water levels, a NapaSan report said.

The sewer treatment pond complex at NapaSan is easily visible from Highway 29 when crossing over the Napa River on the Butler Bridge. It is the large, watery area to the south, where four adjacent ponds behind 10-foot-high levees cover a total of 340 acres.

Most sewage from the city of Napa is treated by the NapaSan wastewater treatment plant. That facility is next to the ponds and is also easily visible from the Butler Bridge, with a tower marked with a red-and-white checker pattern among the prominent features.

But, during big storms, large amounts of groundwater seep into the sewer pipes. Then some extra sewage-treating capacity beyond the treatment plant is needed. That’s where the adjacent ponds created in 1967 come in.

Sewage – which is mostly water—is piped through the four ponds, where solids settle out and microorganisms feed on waste. It takes about a month to treat sewage that could be handled by the treatment plant in less than a day.

Solids remain at the bottom of Pond 1. That’s where the $2.3 million dredging project being handled by Clean Harbors Environmental Services comes in.

The dredge looks like a small boat in the pond. Water there is about five feet deep this summer.

“It’s like a paddle boat so it can operate in shallow water,” Senior Engineer Matthew Lemmon said.

From the dredge, solids are pumped to a processing area, where four centrifuges are used for dewatering. Lemmon compared them to salad spinners that force the water out.

The final product is a black mound of moist materiel that from a distance looks like coffee grounds. It is ready to be trucked to nearby NapaSan fields.

Using biosolids for fertilizers is a practice approved by the federal Environmental Protection Agency. Standards are in place for such potential hazards as pathogens and heavy metals. Neighboring Solano County in 2018 had more than 7,000 tons from Bay Area wastewater treatment plants spread on ranch land.

All of this might be expected to be one smelly operation. But the smell at NapaSan is far from overpowering, even at close range.

Lemmon said the pond contains an estimated 25,000 tons of biosolids, so that 3,500 tons being removed this summer won’t finish the job.

“It’s a smaller project,” he said. “It’s kind of one little bit at a time. It would take a massive effort to do everything at once.”

Dredging isn’t the only way to remove sludge. Previous projects between 1999 and 2008 included draining the pond and driving in heavy equipment to scoop sludge out. But that method is time consuming and costly, a district report said.

The NapaSan wastewater treatment plant and ponds are located just north of Napa County Airport. The facility serves about 82,000 people within 21 square miles in and near the city of Napa.